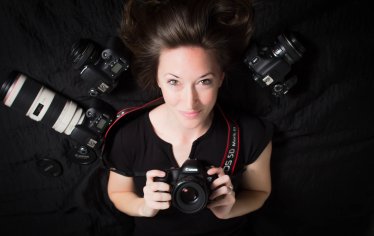 Rachel Fawn hails from a town called Fallbrook, known as “The Friendly Village”, in northern San Diego County. She shot her first wedding when she was 12, with a little point-and-shoot Canon 35mm film camera. Granted, she also played the wedding march on the organ, and sang a song.

In high school she opted for choir, piano lessons and hand bells instead of yearbook, but her love for photography never waned. In college, while double-majoring in Music and English, she landed a job at Palomar College as the publicity and programs assistant, as well as the box office assistant, for the Performing Arts department. While there, she had the opportunity to intercept and use the marketing photos donated by the esteemed Hugh Cox, taken at theatre, dance and music production rehearsals. It was one of her favorite parts of the job, and she itched to be that person behind the lens someday.

Rachel finally took a digital photography class as a senior at California State University, San Marcos, learning Canon d-SLRs and lenses and processing with Adobe Lightroom. That’s when she decided she wanted to be a real Photographer. Life brought her to Pollock Pines a couple years ago, where she and her chef fiancé bought a house to raise their (now three) children close to her sister and her kids. She established her licensed photography business in October 2017, Rachel Fawn Photo.

As a trained performer with a respect and appreciation for the performing arts, Rachel is overly excited and honored to get to donate photography to the Imagination Theater. She wants to express a special thanks to Dave Zarka, and everyone involved with the theater, for allowing her what she considers to be a very special opportunity. She is so happy to be involved with her new community, and she welcomes anyone to contact her for any of their photographic needs!